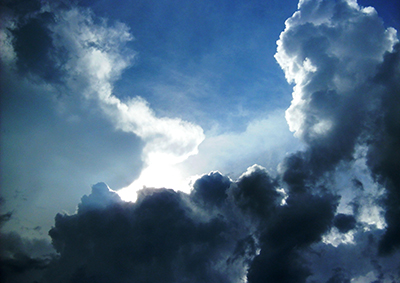 It is amazing how schedules, responsibilities, life, in general, can push a person. And before you know it two weeks has passed.

This is exactly how long it has been since I have been able to go for a run. Though as I looked out the patio door the sun wasn’t peeking over the eastern horizon as I would have liked. In fact, it was still cloudy as the thunder and rain were letting up.

With all that has been going on in my life, I needed to go run. That is when I told myself; Get your shoes on, a few clouds and misty rain is not going to hurt you. Just entering the outdoors seemed to quiet my spirit and I could feel my body release the tension I have been feeling.

It wasn’t long before I felt a bonnet of water resting on top of my hair [not soaking it completely] and my shoes starting to become damp. Thinking of what the people in Hawaii might be experiencing due to the tropical storm, I decided that I could handle the mist and dedicated to finish what I set out to do; 3 miles.
That lead me to pray for the clouds to open over that area in the Pacific, and I was instantly reminded of how prayer opened the storm clouds back in 1997.

My dad was no longer strong enough to walk due to his cancer treatments and it was difficult to get him wheelchaired into the house. Even though he was feeling better, he was still weak. That is when we; my brothers, husband and I took advantage of dad and mom being away for a few days. Taking out the old crumbling steps that lead to the front door we, prepared the area from the drive to the door for a cement sidewalk. The guys worked hard those days leading up to the scheduled date the cement trucks would arrive. On that day we all assembled at the house early, the coffee and donuts were served, and we were going over the day’s game plan. Though as we looked up at the skies we started to get worried, the dark clouds were rolling in fast. It was too late to cancel the cement trucks, they were due to arrive at any moment. Talk among the extra help was not promising and there was a sense of defeat on each person. As the first cement truck came pulling in the drive, I yelled out that we would be okay, that God would hold off the rain. As I fetched the different tools being requested I prayed silently to myself; Lord keep the rain away.

Then something truly miraculous happened! Then dark clouds seriously parted over the house. It was still very dark across the street and the rain started to come down hard, soaking the cornfield. It was even dark and raining behind the house just past the yard. But over us, the sun was shining. The men working even stopped briefly to stand in awe of what was happening. In that moment of silence, I couldn’t help but to stand a little taller, proud of my Papa God for showing up as HE did.

As this memory surfaced my prayer for that area in Hawaii switch from a ‘hopeful thought’ to a knowing that God “can do it.”

This reminds me of when Jesus calmed the storm:

Matthew 8:23-26 The Passion Translation: “They all got into a boat and began to cross over to the other side of the lake. And Jesus, exhausted, fell asleep. Suddenly a violent storm developed, with waves so high the boat was about to be swamped. Yet Jesus continued to sleep soundly. The disciples woke him up, saying, “Save us, Lord! We’re going to die!” But Jesus reprimanded them. “Why are you gripped with fear? Where is your faith?” Then he stood up and rebuked the storm and said, “Be still!” And instantly it became perfectly calm.”

It is noted [in the TPT] that with Jesus asking, ‘why are you so cowardly, you of such little faith?” Jesus was implying that if thy had faith, they could have commanded the storm to be stilled and it would happen. How many times do we read or watch on the news of storms rolling in and we pray ‘hopeful’ prayers that God will act, instead of praying prayers of confidence that God can do that? Let us stop repeating the news reports of devastation in these types of situations. Let’s begin to pray prayers of authority [given to us by Jesus] to speak to the storms and stand in awe of God’s goodness.