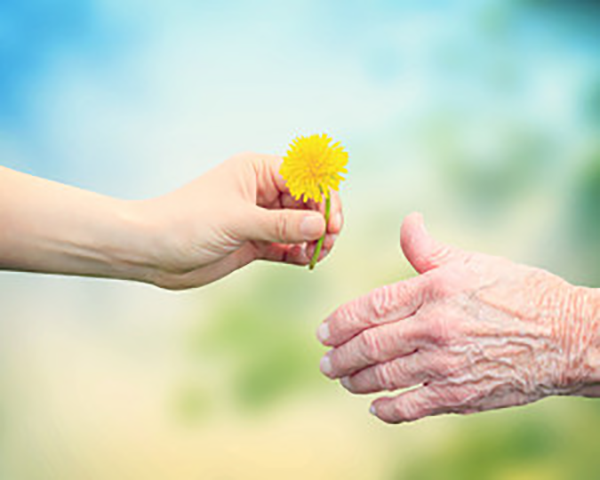 I’ve said it before (many times) that God places people in our paths for a reason. I have to look at people that way, especially with the position that I have as front desk receptionist.  The majority of those individuals who cross my path daily are in pain. And if I don’t remind myself that these people have been directed my Papa God to cross my path, I can get in a “rut.” Just going through life as a routine, going through the motions without thought. And when I do get the attitude of; “this is just the same day over and over again.” I am not very friendly, and sometimes I don’t even really look at the person that I am talking to.

But last Friday I was reminded that I need to make each person that I come in contact with feel valued, even if it is for just a few moments.

As I was rushing around to get things done that I usually have 8 hours to complete a very tired looking man walking with a limp and a cane in his hand made his way to me. He gave me his usual smile and stated the doctor he was scheduled to see. In the past, I would usually make small talk with him but that day I was in a hurry, the office was to close early because of Good Friday and I still had lots to do.

As I rushed through the usual questions I didn’t glance up him, only looking straight ahead at my computer screen. I printed off his “Care Slip” and finally looked up as I asked him to sign his name. I then noticed that the smile that was on his face was no longer there. I thought to myself, did I make this man feel “not valued” or even as a “inconvenience”? In that moment I heard God say… “Slow down!”

I took back the care slip once he signed it and look directly in his eyes and asked him how he and his father was doing. In the past he had shared how he cared for his ailing father and the health struggles of his own. He told about me how he had met a very nice Coke Cola delivery man at the store last week and how he helped him get into his car after he had locked his keys inside. That his father health was the same and how much pain he himself has felt the past few days.

As I listened to him share a little of his life the smile returned to his face. I asked him if he had plans for Easter Sunday and he went on to tell me the celebration that he had planned with his family. Once we were done (maybe three minutes later) I told him that I would put him and his father on my prayer list. The man went on to say with tear in his eye, “isn’t that amazing how GOD places people in your path just at the right time when you need it, thank you for your prayers.”

To tell the truth I felt ashamed of myself, because before I asked him how he was doing I asked myself a selfish question; ‘do I really want to go there with him?’ was rolling around in my thoughts. I was in a hurry and really didn’t want to make the time. But it only took maybe 3 minutes longer to “check him in”. He left my desk with a smile and a warm feeling in his heart that God had placed me in his path at just the right moment to encouragement him. And in a small why he felt comfort to know that someone was actually going to pray for him.

What if I didn’t take those three extra minutes? What if I just kept looking at my computer and not asked him how he was doing? God knew what this man needed, I didn’t. And just think I almost was to self centered to let God use me for a brief moment in this mans life. What would this world look like if we all took 2-3 minutes to extend a kind smile, a word of encouragement or even just our ears ( for listening)? What if that person at the store, doctor’s office, work, gym, bus stop, school … has no one to value them? What if you are the only one in their lives gives them the time to share what is on their mind, or what is heavy on their heart?