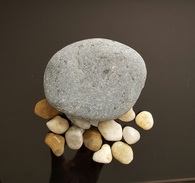 This morning as I was reading my scriptures the oddest thought crossed my mind. I say odd because I was reading in Exodus, however, my thoughts were lead to David and Goliath (1 Samuel 17) and the scene opened up in my mind.

David being a bold and courageous teenager (I assume) recounted the times God had given him victory while tending to his father’s sheep. In his mind’s eye David walked taller than his actual size as recalled what he was able to do when the lion and bear attacked.  Each step David took toward King Saul his assurance for victory grew. When he arrived before the King he announced: ‘The Lord who delivered me out of the paw of the lion and out of the paw of the bear. HE will deliver me out of the hand of this Philistine.’ (1 Samuel 17:37 AMP)

Imagine if you will, King Saul was maybe in his late 60’s (this is my assumption) posed with experience in battles and processed much wisdom (just for the fact that he was so much older). Scripture reads that the entire camp was fearful of Goliath. My own imagination sees these bald men, due to the stress that they have endured by the taunting giant, exhausted and desperate. Then comes this teenager, full of confidence.

Did King Saul believe David because of his posture (boldness) as he walked across the camp to meet him?  Or maybe it was David’s words spoken with such certainty. Yet, it could very well have been the words he spoke that jarred King Saul convictions that GOD is for Israel. Either way King Saul was eager to clothe David with his own armor, helmet, and even gave him his sword.

I can only imagine this sword was long and heavy, sharp on both sides, and incredibly dangerous to the one holding the weapon. Especially if the person is inexperience in how to use it.

Can you see this?! I mean… if the idea of a teenage boy going to battle alone, to fight such an oversize warrior doesn’t give you second thoughts, the irrational vision of a boy dressed in an oversized armor, barely holding up a battle sword, would.

Okay back to the scene…

David not able to move with all the armor on, tells King Saul; ‘I cannot go with these, for I am not used to them.’ And he took them off.

THIS IS WHAT WAS HIGHLIGHTED TO ME.  Read what verse 40 says; ‘…he chose five smooth stones out of the brook.’

You can read on in chapter 17 to learn how the battle was won. But my point is…David didn’t spend much time searching for those perfect stones. Have you ever skipped stones across the water? I have many times as a young girl. And when looking for a ‘skipping stone’ I would pick up several rocks before I found the right one. Making sure it was flat and smooth, to ensure the rock would do the job.

David didn’t have to go on a long search for what he needed to do the job. God supplied him the prefect stones.

When this scene flashed across my mind, the Lord laid a question on my heart: “Have you ever paid close attention to the stones? You know how David won over Goliath, but you overlooked that I supplied him with those stones.”

Ah-haha! I had to laugh, I never noticed the stones. The Lord has been revealing some mindset that I have had for several weeks. Not that my beliefs are wrong, they are just not complete. I keep hearing in my spirit; “Georgia I supply you with ALL.”

I know beyond a shadow of doubt that God supplies us with all our needs to do His will in our lives, but it goes far beyond that. Somewhere subconsciously I believed that God only supplies me with the basics however it’s up to me to do the rest: to find the small details of my life are entirely up to me.

How wonderfully encouraging that GOD wanted to highlight the stones to me. GOD supply us with everything. Not just the opportunity (no man would fight Goliath), not just the experience (David fought off the lion and bear), not just the tools (the sling), but everything (the stones in the brook)!

Do you have any thoughts? Maybe you have thought of the stones supplied for David, but overlooked the fact that God was in the little details of his success.

I want to encourage you to leave a commit and share with me what the Lord has revealed to you. I would love to read your perspective of this, which would only expound what I see now.

Be blessed my friends